﻿ Only Officer Who Served In The Indian Army, Navy And Air Force Turns 100

Only Officer Who Served In The Indian Army, Navy And Air Force Turns 100

Colonel Prithipal Singh Gill (retired) is the only officer who served all three units of India's defence services. He turned 100 today.

"Col Prithipal Singh Gill (without family consent) joined the Royal Indian Air Force and was commissioned as Pilot Officer stationed at Karachi, flying Howard aircrafts," Lieutenant General (retired) KJ Singh posted on Twitter, along with a recent photo of  Colonel Prithipal Singh Gill and another one as a young officer in the forces.

Lt. General KJ Singh shared Colonel Gill's impressive career on Twitter. Colonel Gill served on a mine sweeping ship and INS Teer. He was also part of a Navy escort team for cargo ships during the World War II.

Colonel Gill even trained at the School of Artillery in Devlali and was posted to Gwalior Mountain Battery. He "raised and Commanded 71 Med Regt in 1965 war", according to Lt General KJ Singh. After an exceptional career in the Air Force, Indian Navy and the Indian Army, Colonel Gill retired to farming at his native village in Faridkot. 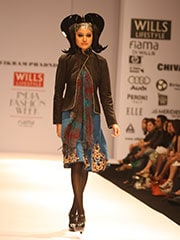 When Anushka Sharma Was A Top Model10 Slides

"Every Indian Proud That Vaccines Given Approval Made In India": PM Modi