Following a tip-off, a police team from Loni arrested the three accused from Khadkhadi village railway crossing in the morning, police said.

Vinod, the father of accused Vineet, was arrested the following day after the shootout for giving shelter to his son. The three men have been sent to jail while their other accomplices are yet to be arrested, SSP Naithani added. 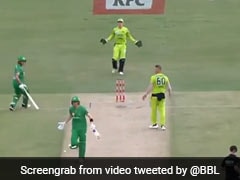 Watch: Batsman Tries To Steal Single In Bizarre Incident But Is Denied

Journalist Shot In Head Near Delhi In Front Of Daughters, 5 Arrested